Universal Design as a design strategy in Germany has developed steadily and yet hesitantly over the last 15 years. Often, its importance has been assessed and valued more highly abroad than in Germany or Europe itself. This applies in particular to the Asian countries of Japan and Korea. For many today, they are still considered pioneers of universal design. From my point of view, this evaluation or assessment must be partially re-evaluated.

This is also a significant result of the increasing willingness or necessity of the industry to deal with demographic change. Here, the additional factors in the fields of lifelong learning, living and working, play a central role.

But where then does good Universal Design become outstandingly developed and visible? Before we start to think about that and take a look into the future, we should nevertheless venture a look into the past.

Where does the philosophy of "Universal Design" come from?

This review must begin with Ron Mace. It was this American architect, who died in 1998, who originally formulated the guiding principle of Universal Design (together with a team of researchers, architects and designers), which is still valid today, as follows:

"Universal design is the design of products and environments to be usable by all people, to the greatest extent possible, without the need for adaptation or specialized design."

It is also important to know that Mace deliberately didn’t refer to standards and laws. He wanted to create an attitude and awareness of design that would achieve a self-determined and independent lifestyle for as many people as possible.

Why Universal Design should be invisible

With the idea that Universal Design should be invisible, Mace went beyond the usual DIN-EN-ISO assessment scenarios. Similar to the sociologist, planning theorist, economist and art historian, Lucius Burckhard (1925-2003), Ron Mace called for an invisible Universal Design.

Physically disabled himself, Mace did not want to be reminded on a daily, hourly, or minute by minute basis, that there should be special, particular or special products, access and architectures simply for him.

He was challenging the hitherto existing view of a foreign-determined way of life. Perhaps this different view also came from Kassel to Bad Arolsen. For Lucius Burckhard taught at the University of Kassel from 1972 to 1997 in the department of architecture, urban planning and landscape planning.

And perhaps HEWI was motivated by Burckhard's question "What use is the most beautiful tram if it doesn't run at night?" to think and design not in terms of products but rather in terms of scenarios, places and lifestyles.

But back to the here and now

Universal Design creates scenarios for learning, vocational training and further education for appreciative and supportive working environments in the home office as well as in the corporate headquarters, enabling intercultural coexistence in public and private spaces, helps shape living from young to old and plays out its strength in the health and care sector.

How Universal Design developed in Germany and Europe

The "first mover", of this fundamental universal design attitude, is certainly the sanitary industry of Germany and Europe. At first hesitantly, but then more and more intensively, as the industry was challenged by demographic parameters to orient itself to the needs for aesthetics, comfort and safety of its customers.

Depending on the company culture and history, this is still interpreted today in a more technical or aesthetic way. Even when viewed objectively and critically, HEWI simply represents both - for the technical, safe aesthetics of its products in the most diverse spatial environments. The HEWI company as a whole was awarded a UNIVERSAL DESIGN SPECIAL MENTION 2020 for this sustainable universal design attitude.

What does this mean for the future?

The current reality of life formulates the challenges for the future almost mercilessly. Places for living and working are being rethought, redesigned, digitalised and literally cleaned.

In the future we will have to learn to live with COVID and its unpleasant relatives, and in doing so we will take care of the potential trivialities. A hygienic aesthetic of our living environments will become one of the keys to a sustainable and liveable future.

It may sound presumptuous, but nevertheless, Universal Design is becoming system-relevant and also more digital. However, let us remain both critical and vigilant, for what use is it, loosely based on Burckhard’s thought, if the digitalised and AI-optimised tram still does not run at night?

Where does Germany stand on Universal Design compared to other countries?

Where do we stand in Germany with our universal design attitude compared to our direct and indirect neighbours? Somewhere in the middle, as is almost always the case? Well, I think at least in the upper end of the middle.

A few relevant thoughts on this. Japanese industry remains the benchmark. In almost every company philosophy, Universal Design is anchored there in the corporate code of the big players (e.g. Toyota, Hitachi, Fujitsu, Panasonic). On the way to an inclusive universal design attitude, however, many hurdles are still visible in the social economic sector.

In South Korea, by decree of the mayor of the city of Seoul, a city of universal design is being driven with power and remarkable commitment. The end of the road there does not yet seem to have been reached. Too much remains to be done to overcome the definition of stigmatising accessibility.

Universal Design in Russia radiates out from Moscow. Here, too, there are impulses worth watching, especially those coming from the self-help groups based in the capital. Current political tensions also contribute to the reluctance of American and Western European promoters and the Universal Design process appears to be being delayed.

The American Universal Design community is currently understandably focused on equality for all citizens and securing the achievement of the "Obama" health insurance policy.

Norway is the undisputed and clear leader of the Universal Design movement. There is a political consensus that the principles of a universally designed society for all citizens must be implemented in all areas of political, social and economic life by 2025. Admittedly, the gap from Germany isn’t small, but it can be significantly reduced if the "first movers" like HEWI take the lead.

Thomas Bade sees social entrepreneurship as a central element of his work and has been committed to the goal of anchoring Universal Design in business, science and society for the last 15 years. He is co-founder of Universal Design e. V., signatory of the Weimar Declaration, lecturer at the Technical University of Munich and, since July 2016, Managing Director of the Institute for Universal Design there.

"From today's perspective, Universal Design does not see itself as a translator or advocate of specific life designs, but rather functions as a systemic designer of a life and work that is constantly in motion."

Get new perspectives on Universal Design, be inspired by architectural solutions and discover how accessibility can be creatively designed!

Download your personal issue free of charge as a PDF. 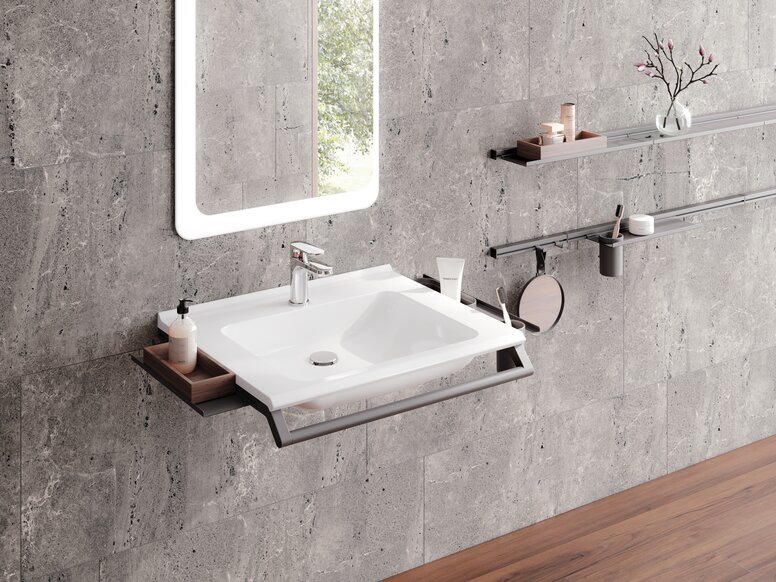 There are a number of things to consider when planning a barrier-free washbasin. 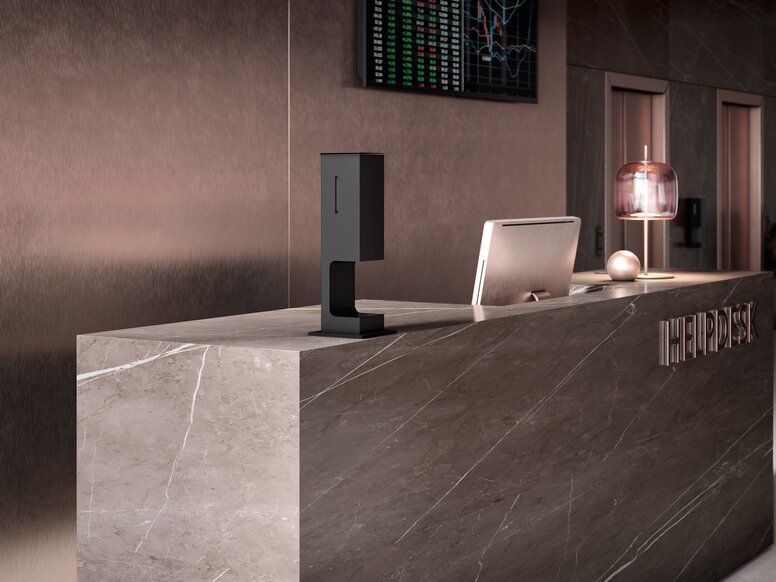 Where should disinfectant dispensers be placed? 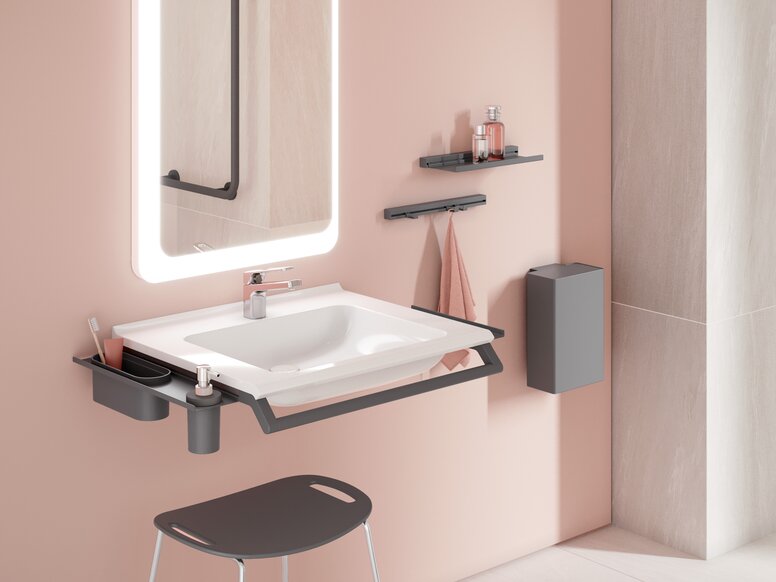